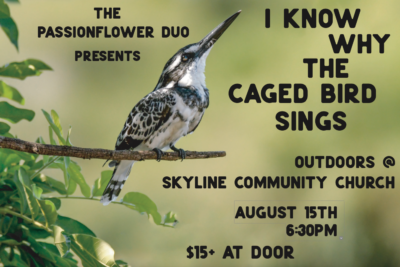 Sunday, August 15 at 6:30pm (updated date and time), the second concert of vocalist Gabrielle Lochard, our beloved Music Director, and pianist Jonathan Liu takes place outdoors at Skyline Community Church. This dynamic duo performs art songs, arias and jazz standards about joy, sorrow and resilience – music by Handel, Rachmaninov, Duke Ellington and Abbey Lincoln. Suggested donation of $15 at the door or Venmo @jonathan-liu-31, though nobody will be turned away for lack of funds. While the vocalist will not be masked, the audience, must be masked and socially distanced. 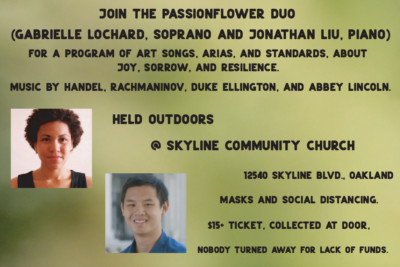 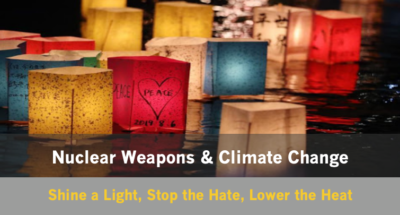 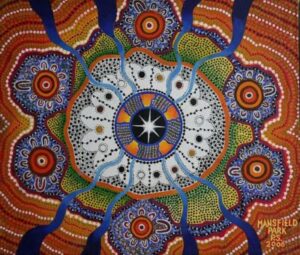 WE’RE HIRING: Skyline Community Church is progressive, inclusive, open and affirming, green, sanctuary church of the United Church of Christ, seeking a part-time, Audio-Visual Technician, with proficiency in Zoom conferencing, and experience with sound and video media production, to manage live-streaming and house audio for services and special events. Services are Sundays, 9:00am set up, 10-11am worship. Occasional online and live events may be additionally offered. Located in the Oakland hills at 12540 Skyline Blvd, Oakland, CA 94619, limited public transportation is available, but personal transportation is strongly encouraged. Compensation $25 per hour. Send resume to office@skylineucc.org

By Cheryl Jones
I had the privilege of attending portions of the “Special Edition” UCC General Synod 33.  This was my first time attending.  Every two years the United Church of Christ gathers as one body to worship, sing, consider resolutions and meet members from other UCC churches. This was a special edition because this was the first all-virtual 8-day General Synod (July 11-18) instead of the usual 5-day conference. The theme was “Rooted in Love”.  It was based on Psalm 1.3a: Blessed is the one who does not walk in step with the wicked or stand in the way that sinners take or sit in the company of mockers, 2 but whose delight is in the law of the LORD, and who meditates on his law day and night. 3 That person is like a tree planted by streams of water, which yields its fruit in season and whose leaf does not wither— whatever they do prospers.

There was worship, speakers, musicians, plenary sessions, workshops, optional events and even a virtual exhibit hall.  The agenda was packed with activities from start to finish.  This “Special Edition” event had 2,596 registered attendees, of which 715 were voting delegates. Of those delegates:
• 634 represented the 38 UCC Conferences
• 48 members of the United Church of Christ Board
• 33 represented Historically Underrepresented Groups

Mid-Week Worship: Delight in God’s Law by Rev. Michelle Higgins, pastor of St. John’s UCC (The Beloved Community) St. Louis, Executive Director of Faith for Justice, co-founder of Action St. Louis, active in the Movement for Black Lives and its Electoral Justice Project, and part of a trio of Black women who host the Truth’s Table podcast
• Focus on abundance and resilience for all humanity, “unity without uniformity,” “liberation without domination.”
• Scripture Reading: Psalm 1
• Offering supports Thursdays In Black, an ongoing campaign to end violence against women.

Closing Worship: RESURRECTION ⇌ AIR ⇌ COVID19 PANDEMIC by Rev. Karen Georgia Thompson, associate general minister Wider Church ministries and Operations and co-executive of Global Ministries
• Focus on a look back at tragic world events since the denomination’s last biennial gathering, with a call for a new vision for the future.  Addressing “air” and “breath” as the last of the three elements needed for living things to be “rooted,” the service centered on breathing.
• Offering supports the Annual Fund of the United Church of Christ

State of the Church

Minister and President, John Dorhauer, declared that he serves a “denomination on the move.  It is relevant to and in a world that is looking for a body fully committed to a love that seeks a just world for all.”  He measured the denomination’s health and vitality by “our ongoing efforts to heed the call of the Holy Spirit and continue to display our courage in the struggle.”

50 workshops began July 7th and could be viewed live or on demand. The workshops were designed to provide a glimpse into the UCC and allow attendees to access information and educational resources that will help congregants and local congregations in leadership, growth, and giving.

There were four plenary sessions instead of the usual eight, in which delegates deliberated and voted on the following issues:
• The Alliance of Associate Conference Ministers Of The United Church Of Christ Request To Recognized As A Formal Group
• A Resolution To Advocate And Act To Change The Cash Bail Bond System To Eliminate Racial And Social Injustices Inherent In The Present System
• A Resolution To Ban The Practice Of Conversion Therapy
• A Commitment To Gender Safety & Equity In Ministry Settings
• A Resolution Encouraging To End 128 Years Of War Between The United States Of America And The Hawaiian Kingdom
• Declaration For A Just Peace Between Palestine And Israel
• “Who Will Speak For The Trees?” A Resolution On The Rights Of Nature
• Becoming A Church Of Contemplatives In Action
• A Resolution To Declare And Respond To Racism As A Public Health Crisis
• A Resolution To Recognize The United Nations International Decade For People Of African Descent (2015-2024)
• A Resolution On Protecting Workers At Churches And Other Religious Institutions

Plenary sessions were interesting to watch as delegates deliberated the resolution, making sure they were worded exactly right. The most exciting issue to me was the Resolution Encouraging an End to 128 Years of War Between the United States Of America And The Hawaiian Kingdom.  The resolution calls on church leaders to ask the U.S. to recognize its own presence in Hawaii as an “illegal occupation” according to international law. In plenary session 3 General Synod delegates narrowly voted against the resolution, but in plenary 4 voted to reconsider the resolution defeated the day before. The final resolution received 72.9 percent approval—comfortably more than the two-thirds required to pass.

Ken Medema participated in the music ministry for plenary session 4 and the closing worship, and possibly others.

The Night of Celebration focused on the many things the UCC has to be thankful for and to celebrate, featuring:
• UCC Open and Affirming Coalition
• 50 Year Anniversary of Association of United Church Educators (AUCE)
• Climate Justice
• Just World Covenant
• Congregational Challenge
• Volunteer Celebration

The Congregational Challenge, based on the number of congregations attending, was won by the Central Pacific Conference; in second place was the South Central Conference.  Our conference, Northern California Nevada Conference, came in 6th.

A bold new campaign, Join the Movement Toward Racial Justice, was introduced in a video presentation by the Associate General Minister and Minister for Racial Justice, Rev. Traci Blackmon. It encourages churches and congregants to build on the UCC’s history and legacy of racial justice work.

The conference, being virtual, allowed me to attend with only paying a nominal registration fee.  The conference was educational, encouraging and rewarding.  I can only imagine how much more valuable the experience is in-person, when away from home and my total focus is on the General Synod and all of it’s offerings. 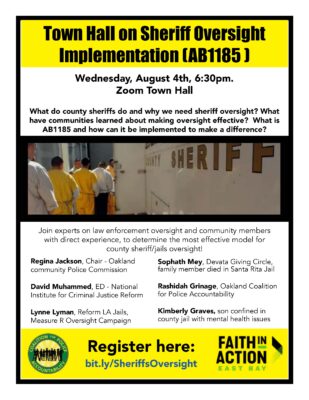 August 4 at 6:30pm, an important town hall on Sheriff’s Department oversight will be held. We encourage you to attend and share information about the event with others. The City of Oakland has instituted an oversight board for the Oakland Police Department, The Coalition for Police Accountability, that is proving effective. This proposed county-level oversight board is much needed. Please attend if you are interested in learning about why this is sorely needed. In the meantime, the following gives good information on this issue. Register at bit.ly/SheriffsOversight

Skyline Community Church is progressive, inclusive, open and affirming, green, sanctuary church of the United Church of Christ. We seek a substitute music director, with experience and proficiency in piano and singing, to lead the congregation in hymns and anthems and occasionally perform solo repertoire before, during, and at the end of services. Organ and choir directing skills are desirable, but not required. Repertoire is planned in consultation with Music Director Gabrielle Lochard and Pastor Laurie Manning. We primarily use The New Century Hymnal, welcoming its progressive theology and inclusive texts, and often source the African Methodist Episcopal Hymnal, Lift Every Voice and Sing, Flor Y Canto, and Breaking Bread. Our Congregational services often include traditional folk music, from African-American spirituals to Spanish and Shaker hymns, to contemporary popular and gospel songs with uplifting lyrics and familiar melodies. Sundays 9:15amwarm up, 10-11am service. Located in the Oakland hills at 12540 Skyline Blvd, Oakland, CA 94619, limited public transportation is available, but personal transportation is strongly encouraged. Compensation $200-250 per Sunday. Send resume to office@skylineucc.org

Rev. Laurie Manning shares Samuel 11, on King David, and her sermon, “Another Perspective: #MeToo” in our our July 25th worship service at https://youtu.be/h8Z06DgYwYw