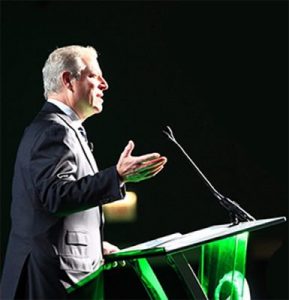 While Laurie is at the Climate Leadership Conference hosted by Al Gore, I looked through our website for blog posts about Skyline’s action towards climate health.  Here are just a few excerpts, and they speak loudly for the environmental justice stand of Skyline.

Also, check out Laurie’s Gofundme page for her travel expenses to the Leadership Conference.   Thanks!
Blessings,  Nancy Montier, Office Manager.

overwhelmingly approved the Climate Resolution calling on clergy and congregations across the denomination to take action to protect the environment, and churches are lining up to stand behind it publicly.

Posted April 25, 2017:  Join the Skyline contingent going to the Oakland March under the People’s Climate March on Saturday, 4/29 (100 days into the Trump administration).  We will meet at Lincoln Square in front of the liquor store at 10:00 am and carpool

Posted June 30, 2016: From Laurie’s speech at the June 25 No Coal Rally:  “I feel so much hope today, here with you, and here representing the voices of so many Oakland faith communities, including the dozens that are part of CIPL & the Sierra Club, in saying no to coal in Oakland ….  Tonight, our City Council will vote a/ bringing coal into W. Oakland from Utah to export to Asia. I think if they asked us,  we’d tell them right away – NO! no more coal dust, no more asthma, no more cancer, no more climate change!”

Posted Feb 17, 2016:  Statement by Rev. Laurie Manning at the no-coal-in-Oakland press conference outside City Hall Tues, Feb 16, 2016:  “We’re all familiar with “the Golden Rule.” It’s a universal principal, an ethic of reciprocity that teaches: “Do unto others as you would have them do unto you.” “Love your neighbor as yourself.” It teaches us to care about our neighbors.  Who doesn’t care about the kid down the street, or down the hill breathing dirty air?”

Posted Sept 22, 2015:  This week, millions across our nation will witness the words and vision of a man [Pope Francis] who has revolutionized a church and reinvigorated a 2,000-year-old gospel…. What’s revolutionary about Pope Francis is how he lives out his Christian faith through selfless good deeds, prophetic words to world leaders, and compassionate pastoral care. …We invite you to join us in praying for a transformative week for the US,…particularly with respect to climate change. …Skyline’s Green team is partnering … to host two prayer vigils on Wed Sept 23rd, at 6:30 am and 6:30 pm here at Skyline.

Posted Aug 31, 2015:  As Pope Francis prepares to speak to the US Congress …about climate change, interfaith vigils are being held across the country. Skyline United Church of Christ, joined by members of other East Bay congregations concerned about the climate crisis, will host two interfaith prayer services for the climate – one in the morning and one in the evening.  WHEN:   SUNRISE at 6:30 a.m. &  SUNSET at 6:30 p.m

Posted April 29, 2015:  THE WISDOM TO SURVIVE (a film) accepts the consensus of scientists that climate change has already arrived, and asks, what is keeping us from action? The film explores how unlimited growth and greed are destroying the life support system of the planet, the social fabric of society, and the lives of billions of people.…The film features thought leaders and activists in the realms of science, economics and spirituality discussing how we can evolve and take action in the face of climate disruption.

Skyline’s commitment to a green, healthy world for all is clear in our actions.  What’s next?