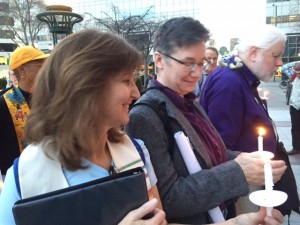 News outlets from the New York Times to Mother Jones Magazine have praised the leadership of California at the November UN climate summit in Paris.  The LA Times portrayed Governor Jerry Brown’s active presence in Paris as representing not only the crafting of his “political legacy” but also his preoccupation with preventing “catastrophe.”

Yet environmental lawyers, community activists, and faith leaders are increasingly bringing to the public’s awareness what has long been California’s dirty secret. In a state known for its environmentalism, environmental racism has remained a festering, unbridled sin.

Environmental racism is the placement of low-income or minority communities in close proximity of environmentally hazardous or degraded environments such as toxic waste, pollution and urban decay.

Skyline Community Church UCC in Oakland has been active in struggles against environmental racism here in California, particularly with respect to fracking and the proposed coal terminal in Oakland.

In November, Nancy Taylor of our Green Team and I joined together with an interfaith coalition to deliver a letter to Brown that called for a halt to fracking.

On Tuesday, Feb 9, 2016, several members of our Green Team  joined me as I addressed an interfaith rally outside Oakland’s City Hall in seeking to delay consultant work that could bring the city closer to having a coal terminal.  Becky Taylor, a former Oakland Port Commissioner and a member of Skyline’s Green Team and I spoke at the City Council meeting against coal.   In my remarks, I spoke of the pride I feel about Governor Brown’s environmental leadership in Paris, but then asked, “Why would we want to be complicit in prolonging and accelerating this environmental and humanitarian health crisis?”

The combined will, wisdom, voice and energy of the interfaith community of Oakland, its people, and prayers resulted in the City Council voting to delay the opening a coal terminal in Oakland!

Skyline is a small but mighty force for environmental justice here in Oakland! Thank you Skyline!!

Here are a few articles that reference our good work!